The trade union movement in Ireland has an important role to play in ending sexual exploitation, which is a form of gender-based violence.

The sex industry values youth, with poverty and coercion the key driving forces into the trade. SERP UCD research found that 51.3% of participants first entered prostitution between the ages of 16-24; a time when they should be enjoying life and discovering themselves and the world around them as they plan their future.

Decent work, as defined by the world’s Governments, Employers and Workers, sums up the aspirations of people in their working lives. It involves opportunities for work that is productive and delivers a fair income, security in the workplace and social protection for families, better prospects for personal development and social integration, freedom for people to express their concerns, organize and participate in the decisions that affect their lives and equality of opportunity and treatment for all women and men. 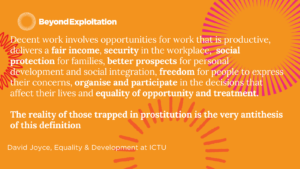 Recent research from SERP UCD found that for the women currently trapped in prostitution in Ireland, many of them migrant women, their reality is the very antithesis of this definition. Many of the participants were forced into the Irish sex trade and were prevented from accessing any forms of support or assistance by a pimp or other third party. How crushing must it be to their view of the world and of themselves, having been pimped or trafficked into prostitution – through grooming, deception, coercion and debt bondage –  to find themselves facing the kind of sexual exploitation described so chillingly in the report.

Many participants entered prostitution seeking to escape poverty, to survive day-to-day, to support loved ones, to pay off debts, to pay rent, and to fund their education or future plans.

Violence, and threats of violence are endemic in prostitution, used by criminals, pimps, traffickers and buyers as a means of control and to ensure individuals bend to their will.

It is no surprise therefore to discover the health impact of such a life and the multiple sexual, reproductive and mental health harms arising from women’ involvement in prostitution. The long-term health impacts of prostitution make for harrowing reading; but it is essential if we are to act in an informed manner to address the issues raised.

It’s unsurprising that the vast majority of women proactively plan to leave as soon as they can, but tragically find themselves trapped. Even when they do emerge from prostitution they are often in worse economic circumstances than when they first started. 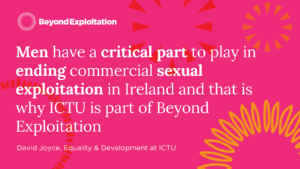 Men have a critical part to play in ending sexual exploitation in Ireland. I once again, as part of the White Ribbon Ireland Campaign to end Gender-Based Violence, publicly pledge never to commit, condone, or remain silent about Gender-Based Violence and male violence against women.

I would say to men who are engaged in the commercial sex trade and, perhaps for some, do not feel they are doing any harm, to inform themselves about the lives of these women and the impact that their actions, no matter what their intentions, are having. However, we would of course be foolish to solely rely on such an approach and that is why Congress is part of Beyond Exploitation, Ireland’s civil society campaign for equality and freedom from sexual exploitation. Beyond Exploitation is informed by the Equality Model and Congress also approaches the issue from a perspective that sees the experience of most women in prostitution, whether as victims of human trafficking or not, as one that risks physical and psychological harms. The business of commercial sexual exploitation as inimical to ideas of decent work, human rights and dignity, and, as such, a deep and pressing issue for any grouping whose mission involves equality.

You can learn more about the Equality Model including the Congress submission to the review of the Sexual Offences Act 2017 here. In this we highlighted that the levels of physical and sexual violence experienced by women in prostitution are immensely higher than the general population of women and girls.

ICTU especially welcome the third part of the Equality Model – strategic exit routes from prostitution and join the campaign in seeking policies and measures aimed at giving women in prostitution real choice. We will continue to advocate for full, integrated supports and opportunities that allow everyone in Ireland to choose not to enter prostitution because of poverty, insecure immigration status, discrimination or other vulnerabilities, and that allow women to leave prostitution if that is their choice. We believe that access to decent work is the best exit route.