‘I’m falling through the doors of the emergency room; can anybody help me with these exit wounds?’, The Script.

Prostitution for me is when a woman ceases to be seen as human and becomes a trapped mind who lives in a body that no longer belongs to her. How our trapped minds cope depends on a wide range of things. We learn and pick up survival skills; we used laughter as a coping mechanism, we only trust each other for we know what the world thinks of us, those messages come in loud and clear and there are no messages that we are ever welcome back, we have become the worst insult a woman can call a woman or a man can bestow on a woman. We sign a social contract that comes with the highest cost, for the small print of this contract; the terms and conditions are harsh, disturbing and unjustifiable. So, it would appear to most that we stand free on the street and yet everywhere we are in chains.

In the end, I, myself did not just make a choice to leave or decide one day that I had had enough, although my mind was struggling badly and my body was drained completely I had no idea how or if I could ever escape prostitution. Heroin had become my lifeline, it shut out my thoughts and feelings about what had become of me and the cruel events that had happened. Remove it and I didn’t believe my mind could cope and what was left of my sanity could and would not prevail. In the summer of 2010 my daughter needed some in-patient care, in the first week or so she had met a social worker and for some reason took to her, which was unusual as my daughter is quite guarded about whom she lets in. You see, my daughter and I had lived a very isolated and lonely existence, apart from a few good friends she had, we never saw anyone and nobody wanted to know us. I was her full-time carer and only ever left her side to go to the Burlington Rd, because of this we had formed a tight bond, and an unhealthy attachment to each other, and it was us against the world, so to speak.

After a couple of weeks, the social worker asked me to drop into her office, which I did with the usual guarded front but what I didn’t realise was that I was about to be asked a few questions nobody had ever asked and they were asked away from the street. Her first words to me were “your daughters a lot stronger than you think”, then she said “but I want to know, what is life like for you?” What is it like to be a mother and watch your daughter struggle and feel helpless? And what’s it like to be out there at night, all alone? These questions terrified me at the time because they were deep; they were powerful, too powerful for me to answer just yet. I left her office very quickly but I couldn’t stop thinking about them, but what I didn’t realise was that I had just met the person who would change the course of my life forever.

I returned to see her after a few days, I began to talk and she listened. Over the next few weeks we built up a strong relationship, I’d let her in because I knew she understood why and how we had come to be where we were. When my daughter’s treatment was finished and she was coming home, the social worker asked me one final question, “do you now trust me enough to make a phone call on your behalf and I said yes. I walked off the Burlington Road on the 10th Oct, 2010 and although I didn’t know if I was strong enough to make it, I knew looking down that street for the last time that I’d never be back, for I now had someone who believed in me and who could place me in the safe hands of others who would and did. 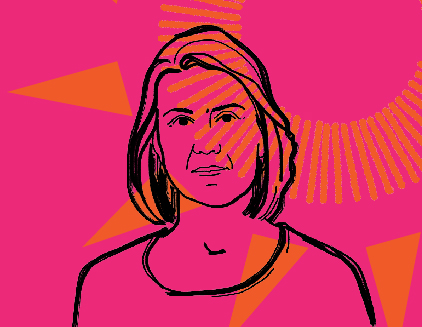 And so, my re-orientation back to life began with a medical detox at Beaumont, the years of addiction had taken its toll on my body but it cleared itself of heroin and began to heal. But I had a much tougher fight to come for I was about to discover the severe psychological effects of prostitution. After Beaumont I arrived at the Rutland a broken jig-saw and I had no idea how I was ever going to put the pieces back together. But like all complexed puzzles the first thing you must do, is build a border that will surround and protect the pieces from falling out. The building of that border was intense, I remember one of the nurses asking me if I was alright and I told her that I felt like a war had just ended and I didn’t know who I was. It was PTSD coupled with disassociation although I wouldn’t have used those terms; I just thought I was losing my mind. You see, I was bought by 4-5 buyers a night, 2-3 nights of the week for about 45-50 weeks of the year, every year for nearly six. That is approximately 4,000 times I was purchased by a buyer to be sexual exploited, and believe me that level of exploitation takes its toll. I was raped approximately 12-15 times, I used to say 3 times and one gang rape but there were 8 men there that night and 7 of them took their turn. The eight man never touched myself or my friend but he also never did anything to stop it which always reminds me of a famous quote ‘that history recalls not the actions of our enemies but more the silence of our friends’ because his is the only face I can remember. All the other faces are distorted in my mind; they have never haunted me in their human form. I had to work one to one with a psychologist, these sessions often involved 3 chairs, one for me and the psychologist and the third one for Lucy as I was still referring to her in the third person. PTSD can manifest itself in different ways depending on the person for me it was violent flash backs, haunting nightmares with night sweats that I was afraid to close my eyes at night and at one point, I felt I couldn’t go on but I never wanted to go back, my only option was to leave this world altogether, feeling suicidal was not unfamiliar to me, I had previously made attempts on my life, one left me with severe bruising and the other well let’s just say I’m lucky to still be here. As these thoughts began to take hold in rehab for some reason the words of a young wise Garda came into my head, it had been one of the saddest nights on the street, one of my friends had fallen into the canal and drowned, her body was cold & lifeless only an hour after she had said hi and passed me on the street, I was in a daze when a young officer asked me a few routine questions and then he looked me in the eye and said, “don’t tell me that that couldn’t have been you, and is that what you want your legacy to be”, his words at the time did not reach me but now as I sat in rehab, contemplating my own end, I thought oh my god he was right, I was about to make it me and this is not what I wanted my legacy to be, I took out a blank piece of paper and wrote on the top, I asked myself two questions, What did I want my legacy to be and how could I achieve it? His wise words had finally reached me.

I always refer to this time in my life as the Shawshank Redemption moment, where an injustice has been served and you are imprisoned, whether that prison has bars surrounding it or not. You then have two choices, you can get busy living or get busy dying and if like me, you choose living then the only way to escape that prison is to dig down deep, into that dark tunnel, wade through the crap and sometimes you will have to swallow some of that crap or at least acknowledge that it is in fact your own crap and only then will you be able to emerge from the dark and know your own freedom. And if you know your own freedom then you can assist in getting others to theirs.

So, I began to listen and drew on every bit of strength I owned to fight of the demons that were tormenting me. I left the Rutland after 5 weeks but continued to work with the clinical psychologist for another 3mths. Those few months were painful and challenging, I found being out in the day difficult and never left my home without music playing loudly in my ears, I was not ready to hear the normal day time world around me, I didn’t trust it yet. I would go out in the middle of the night, darkness and feeling fearful was familiar to me and I wanted to tempt it, to challenge it and to let it know that I was no longer afraid and that I would never be afraid again. My nightmares continued for many months but I faced each demon as they arose. My senses heightened and anywhere, at any time, a sound or a smell could take you back somewhere you did not want to be. I would often feel completely naked and thought everyone else could see this and I had no control over where they looked or where they could touch. Sometimes I felt like they were still inside me and I couldn’t get them out. There were days I couldn’t get out of shower, I would scrub and scrub and then there were times I didn’t shower for days because what was the point, I was never going to remove the filth. I searched for answers and explanations to this madness from the psychologist, from my key-worker in Ruhama, from books, music and movies. I knew that although it was heroin that brought me to the street, it was prostitution that brought me to my knees and if I let it, it was prepared to hand me out a life sentence, a sentence I refused to accept, I had already served enough time, my debt was clear and I wanted my life back. So now 10yrs on, my nightmares are gone, my demons have surrendered and I have managed to reclaim my body and mind. I live with faded scares and some baggage but my baggage has been through customs, all has been declared and I am cleared to go.

I am both privileged and lucky to have survived prostitution as so many do not.

This is just a glimpse of my exiting story, one woman’s story, but there are hundreds more like it and they matter!